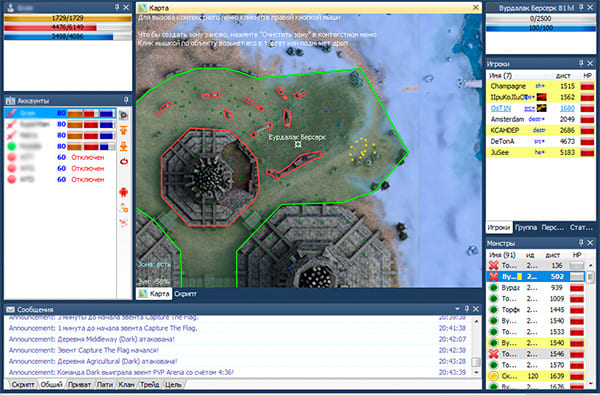 Adrenaline is the favorite and most stable bot for lineage2.

Developers listen to user requirements, regularly update and check frost before upgrading. Therefore, for all the time of work, no auto-blocking on official servers!

The list of servers where the bot works Adrenaline Bot

What does a bot mean?

A bot is a small interface with huge possibilities hidden inside. Opportunity to become the best player (you do not believe in fairy tales that the top players being legits?), The opportunity to put twinks for the extraction of missing resources or put whole packs for the farm of various resources and selling them for real money. Many people make great money as a student, simply putting a bot in, setting up and thats all. All that is needed is a little knowledge of the game, and knowledge of setting is one week's work. More smarter bots on the second day, using a maximum of functions.

A bot knows almost everything that a human can. It is even possible to prioritize, so that in the difficult situation the bot would first heal, and only then the buff or etc. And a bot, unlike a person, has one huge plus - it does not lose vigilance, does not get tired and farmed when YOU SLEEP. Agree, wake up and find a drop in the form of a gun - this is the beginning of a great day, for me, as an experienced boter, for sure!

Some interesting facts about bots:

Short FAQ on the bot:

You can buy a script from third-party developers directly from us on the site. Get the maximum out of the bot!

Consider that writing scripts is an activity that usually requires programming experience. Therefore, in most cases, performers are experienced programmers with a very good pay. In connection with this circumstance, be sure to indicate in the application the estimated budget. Otherwise, the application is likely to remain pending.

Thank you for your question, we will contact you.

Thank you for your question, we will contact you.

You can buy a script from a third party developers directly on our site. Get the maximum out of the bot!

Do you want to purchase the product? Contact us With chat or leave a request:

To receive the script, enter the email and you will receive a download link in the mail.

Script name: Version of the game:

Brief description of the script:

You can buy a script from a third party developers directly on our site. Get the maximum out of the bot!

Do you want to purchase the product? Contact us With chat or leave a request: